Nice weather, several test-rides and riding lessons, Moto Giro Dolomitico is sold-out and there also is final big Party with Melandri, Scassa, Picco and Sergio Sgrilli.
Gerno di Lesmo (MB), 8th July 2011 – Even if it ended more than 2 weeks ago, people still keep talking about the huge success of “Dolomiti Ride 2011”, the event which took place at the weekend between 24th-26th June in the wonderful Fassa Valley, an event for the fans of motorcycles and scooters of any types and brands.
A great deal of motorcyclists and motor-scooter drivers have had the amazing opportunity to spend an entire weekend in contact with the object of their love, thanks to several planned activities, and with the participation of many motorcycle racers, such as Marco Melandri, Luca Scassa, the iconic and evergreen  Dakar racer Franco Picco and the Tuscan comedian Sergio Sgrilli from the TV show Zelig.
During Dolomiti Ride 2011 all the fans were given the wonderful opportunity to test the latest products by Yamaha 2011, to participate in the riding lessons by the Sport Riding School, to take part in a special group “excursion” through the enchanting mountain passes in the Dolomites, but also to participate in many amusing shows with very special guests, trying to win fantastic prizes by Yamaha (e.g. a shiny new Yamaha X-MAX 125).
“Passion is not in crisis: with this awareness we left the Fassa Valley, and these days this is something important to be aware of. This experience has been at the same time positive and moving because it revealed that so many people still want to share kilometres and tell stories about their life on wheels; this feeling was shared by all the motorcyclists who spent 3 days with us in the Fassa Valley during the Dolomiti Ride 2011.

We would like to give particular thanks to all Yamaha Official Clubs and to remind everyone of the future edition of the Dolomiti Ride: without their incentive, their interest in organizing meetings and without their valuable contribution, events like this would not be possible” – so said Paolo Pavesio, Yamaha Motor Italia Spa’s marketing and communication director. 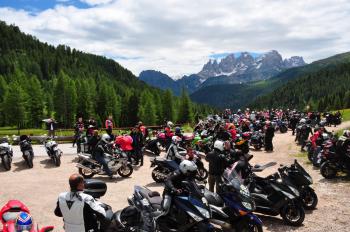 - more than 3.000 litres of used petrol
- 5 articulated lorries to haul 120 Yamaha motorcycles and scooters to Canazei
- 50 staff members, including the volunteers from the 7 Yamaha Official Clubs
- 700 booked rooms thanks to the convention with the Fassa Valley’s tourism board (APT)
- more than 1.500 product tests
- more than 35.000 kilometres ridden by the test motorcycles
- Moto Giro of the Saturday morning sold-out in advance (maximum number of 150 motorcycles allowed, more than 200 participants in total)
- Sold-out Yamaha Party on Saturday night together with the official clubs (more than 500 participants)